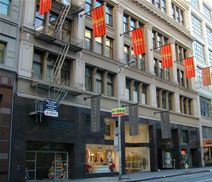 49 Geary is a remarkable building that was once a major communications hub, at one point housing the entire West Coast operation of Western Union. It is now home to about sixteen art galleries (at last count) and three rare book dealers: the William Blake Gallery; the Brick Row Book Shop, dealing primarily in English and American literature as well as a variety of other subjects; and John Windle Antiquarian Bookseller with an inventory ranging from medieval manuscripts to 20th-century first editions, fine press printing and binding, Americana, and illustrated books.

Our building remains a major attraction for anyone interested in the arts and a visit will keep you happily occupied for hours. It is conveniently (some say dangerously) close to Neiman Marcus, Macy's, and the Union Square shops that rival those of Madison Avenue. Also within easy walking distance are a dozen or so very fine restaurants and a host of hotels in all price ranges.

Getting here is easy: underground parking is available in Union Square and elsewhere nearby; the Montgomery Street BART stop is two blocks from 49 Geary; and many bus lines run through Union Square.